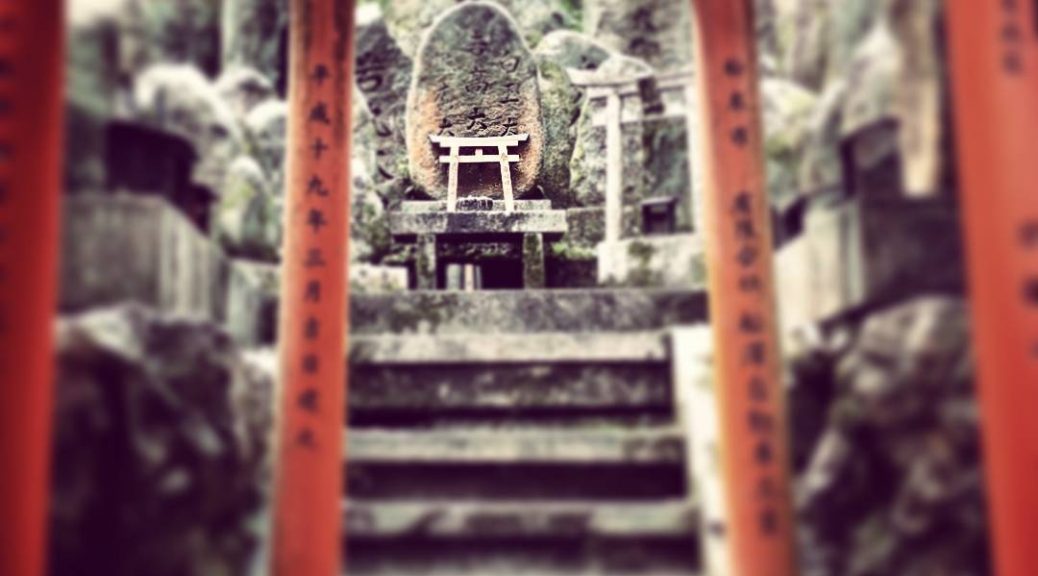 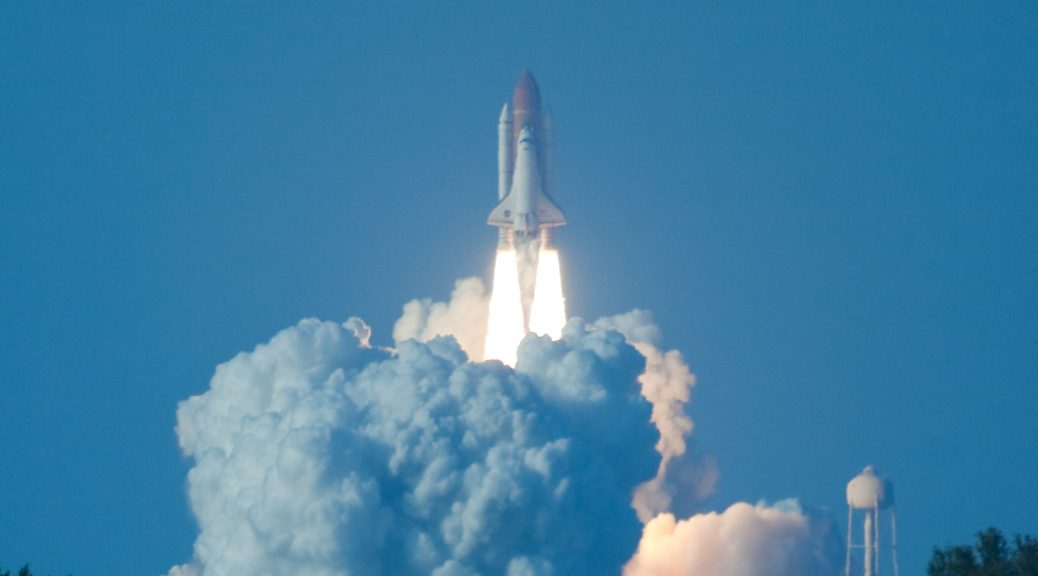 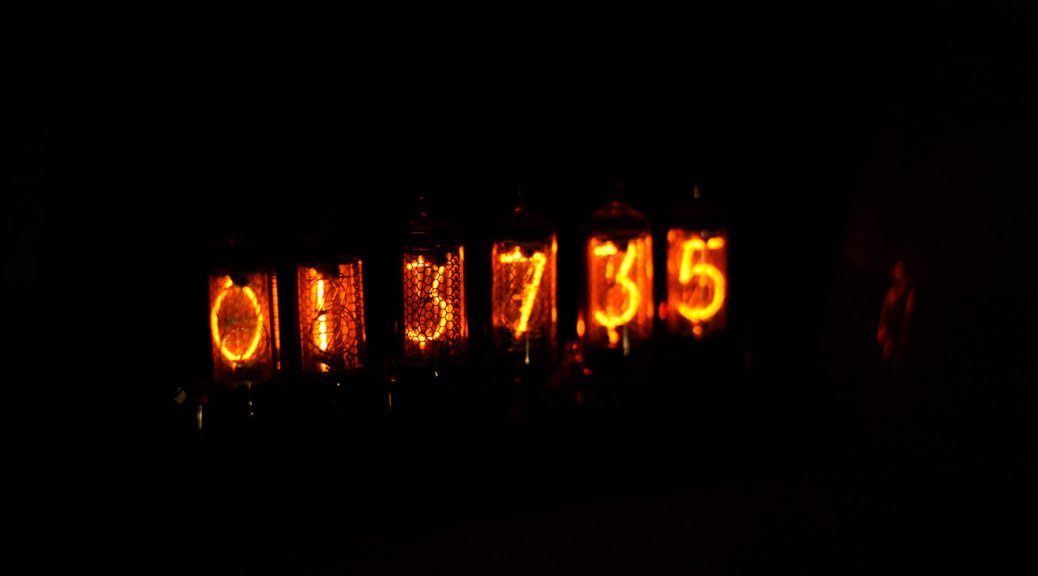 The Universe says simply, but with every possible complication, ”Existence” and it neither pressures us nor draws us out, except as we allow. It all boils down to nothing, and where we have the means and will to fix our reference within that flux, then there we are. Let me be part of that outrageous chaos… and I am. I was there to see Discovery go up on her last mission, STS-133. Farewell to Discovery from cmdrfire on Vimeo

That time of year again; Speed week comes and goes, but I am still not there.

That little device which changed – and continues to change – everything was first introduced this day in 1952. Christmas 2006: I decide that my life needs some more Soviet Union in it. What do I decide to build? A Nixie Clock!

Many thanks to Laurence Wilkins, from whom I sourced the kit – he can often be found on eBay under username laurencewilkins. He’s a top man. 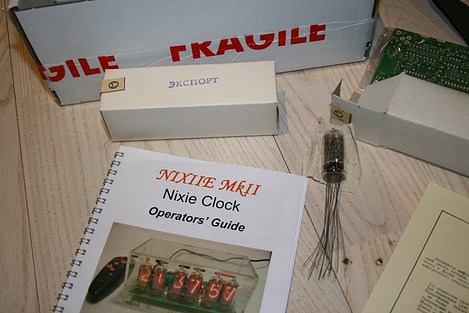 That’s a Nixie. Looks kinda like a squid, and is a pain to wire. 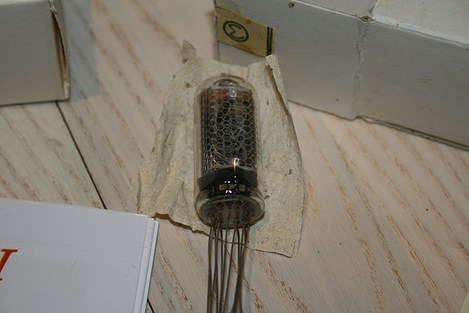 Complete with datasheet in Cyrillic! 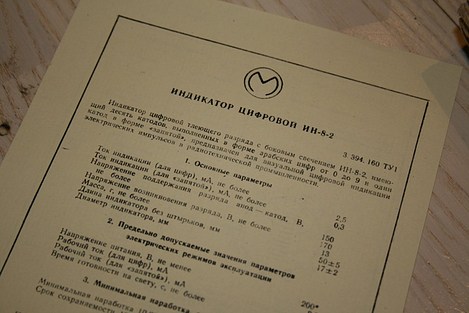 The board with some resistors fitted. All the resistors were fitted in the same direction for neatness (all those Gold bands line up 😀 yes, I’m a dork) 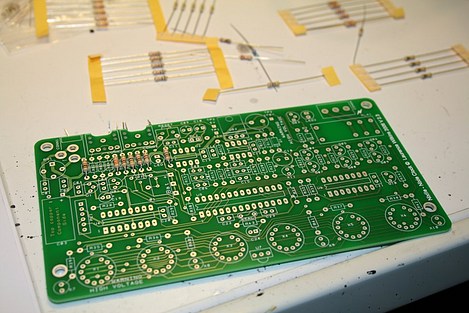 All the resistors soldered in now. This part is all pretty straightforward. 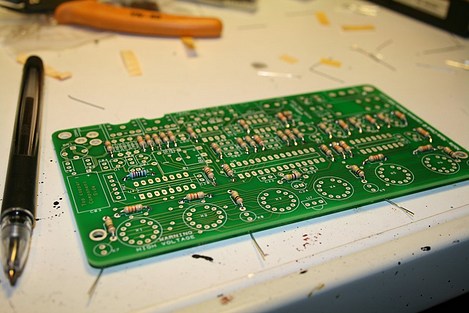 Now the capictors, IC mounts, and a few other bits and pieces. All that remain are the transistors and a couple other minor components, plus the neons and Nixies themselves. 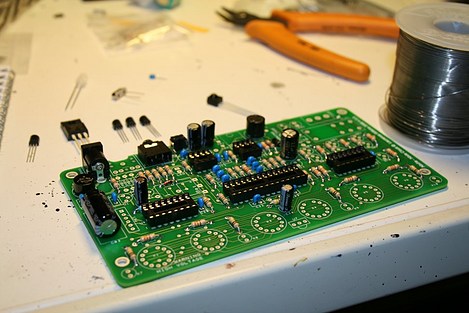 Putting in the Nixie tubes was the most fiddly part of the entire project, as they came with ridiculously long tails. It felt kinda sacriligeous cutting those tails off; those Nixies have been preserved more or less untouched since the Cold War. Still, no point their existing if they’re not being used, right? 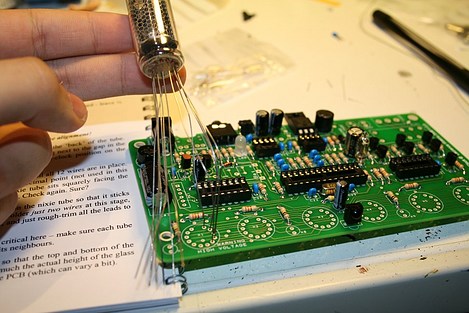 Threading the Nixies through did require a lot of patience. This was the slowest part of assembly. Each tail had to be threaded through to the correct joint, otherwise the Nixies would not light up correctly (or at all!) 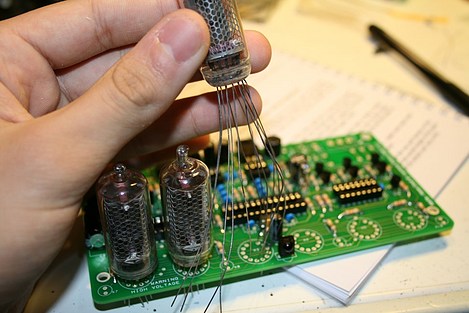 Soldering the Nixies was also quite fiddly, despite the now cut-off tails. 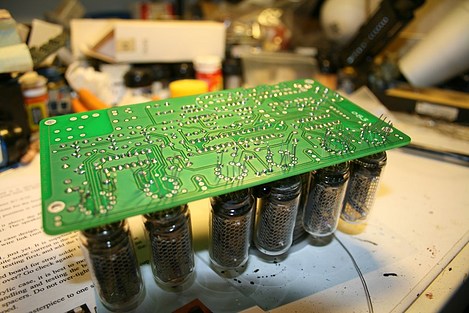 Clock is more or less finished now. Just needed to perform some tests and sequentially install the ICs. 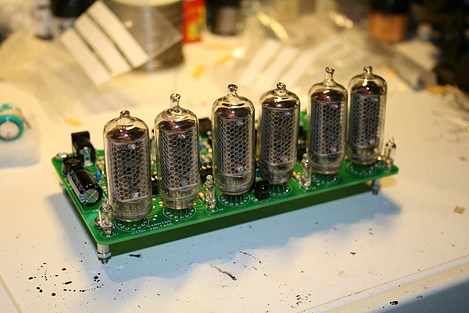 Back of the clock, so you can see all the circuitry. Note the lack of ICs in the holders. There”s two neat Soviet ICs driving the tubes themselves, I”ll get pics of them up at a later date. 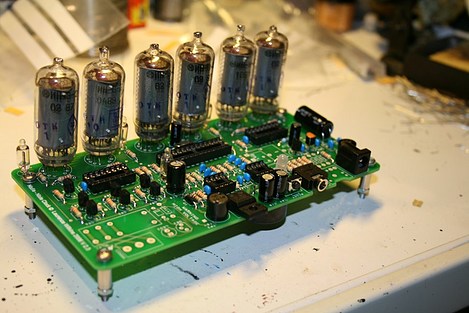 Then there was a period of going through some testing with my trusty multimeter, and then slowly firing everything up. Audio checked out okay, and then the High-Voltage circuitry (170V) came next… and nothing happened. The neon indicator bulb failed to light. A brief panic, followed by a quick check of everything with the multimeter (hmn… 18V is not 170V), and a touch of the soldering iron to the regulator, IC, and smoothing capacitor seemed to resolve the issue. Must’ve been a dry joint. The result? A nice crisp 172V DC and the first of our indicator neons lit up: 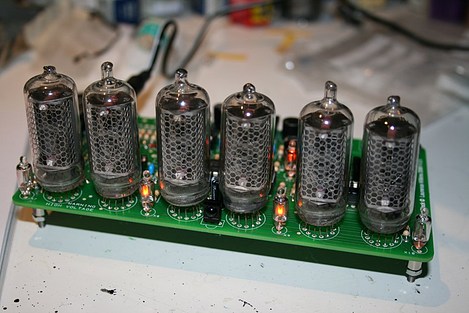 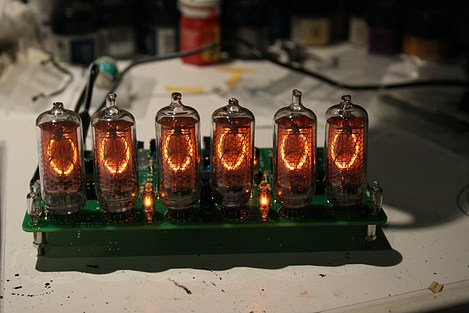 I was pleased when those digits flickered on, after a multidecade rest. The clock looks lovely, with that soft orange glow. Set the time, and it’s done, bar a few parameter changes. 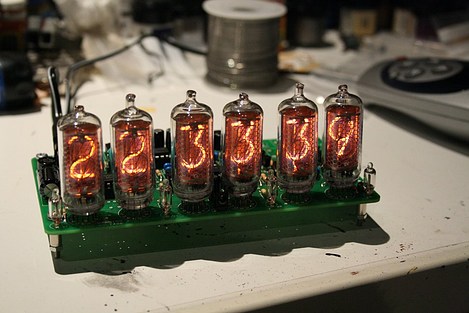 At this point, I powered down the clock, and soldered in the battery that’ll allow it to run for four days off-power. Power up again, and set the date (Christmas 2006!) 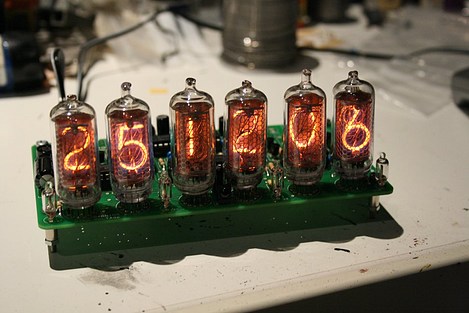 Looks pretty awesome in the dark as well, with a lovely soft glow. It really is a beautiful piece of work, and the Nixies are much nicer than a VFD or LED could possibly be. 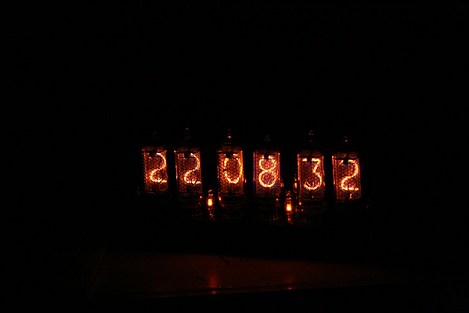 A great little project requiring only a few hours of work. Thanks to Laurence Wilkins again for supplying the kit. I”ll take a short vid of the clock in operation soon and upload that onto this page as well.